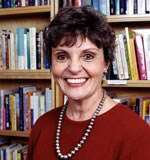 In the summer of 1994 I was invited to join the staff at the Resource Center to facilitate a weekly support group for women with recurrent and metastatic cancer. It was called the “Living Beyond Limits” group, based on the clinical work and research done at Stanford University by David Spiegel, M.D. We have expanded and started a second group. The groups function as a sisterhood and include many women who are involved in third and fourth attempts to arrest their cancer. All are facing the very real possibility of dying. My responsibility is to create a safe environment in which they are supported in expressing their hopes, fears and frustrations and assisted in finding fulfillment and meaning within the limitations that they are forced to accept.

My Bachelor’s degree is in French literature from Catholic University in Washington, D.C., though my first three years of undergraduate work were done at Wellesley College in Massachusetts and at Reid Hall in Paris, France. My interest in social work developed at Catholic U. where I found my first opportunity to counsel younger students as a dorm counselor and to work as a caseworker at a Catholic Charities agency. After graduation I joined the Peace Corps and was trained with fellow volunteers at the Columbia University School of Social Work. I was assigned to a “community development” project in Bogota, Colombia for two years. When this was over, I went back to Columbia for my Master’s Degree in Social Work, which was awarded to me “with distinction” in 1967. Ten years later I pursued my clinical interest in family dynamics by completing a fellowship in family therapy at the Cedars-Sinai Thalians Community Mental Health Center in Los Angeles. I passed the California licensing exams permitting me to practice psychotherapy in 1977.

My first experience working with cancer patients was as a clinical social worker at UCLA Hospital. Though I was assigned to the neonatal ICU, because of my fluency in Spanish, I was occasionally asked to “float” and assist with cancer patients who could not speak English. I was in my early thirties at the time and came face to face with the issues of death and dying. The experience left an indelible mark that led me to subsequent work co-facilitating support groups at The Center for Healing Arts, where life-threatening illness was regarded as a potentially transformative event in a person’s life. When The Wellness Community was founded in the early 80’s, I was one of the original staff and remained there for eleven years, working on program development and facilitating up to four support groups a week. I then worked for two years for Vital Options, a program for young adults fighting cancer, as a Spanish-speaking facilitator. The Norris Cancer Hospital at USC also recruited me at that time to facilitate groups for men and their partners who were dealing with the effects of prostate cancer. My work with people fighting cancer has been woven into a private psychotherapy practice I have maintained for over twenty years in Santa Monica and West Los Angeles in which I work with individuals, couples and families.

If it weren’t for my work with cancer patients, I’d probably have missed a certain essential appreciation for the gift of health and life itself. I find my relationships with others and with myself are on some level imbued with the realization that nothing is permanent and that life is to be lived fully, with purpose and joy, to the degree that this is possible. Taking photographs, going to see foreign films, dancing and traveling are my favorite activities. I am also drawn to creating time alone for writing, reading or gardening. I enjoy jogging in the neighborhood three or four times a week, running an occasional 5K and spending time in the woods whenever I can. My four children are grown and living all over the country. They are in their twenties and thirties and establishing their directions in life. We are close in spite of the miles and talk frequently over the phone, or communicate via “e-mail,” about their challenges and choices. My greatest joy is when they all converge in Los Angeles for family get-togethers.

The Resource Center is a kind of oasis for me, as well as, for the women with cancer who go there for understanding and support. It is a gentle environment of caring where the assurance that one is not alone in one’s struggles is always conveyed. It is a place for refocusing and refueling…a place for honesty and standing in the fire if need be, with the arms and hearts of others right there with you. We end our groups with a “huggle,” our version of a huddle, and as we look into each other’s eyes, we recommit to giving the next moments, days and weeks the best shot we have.