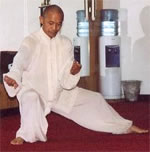 Grand Master Tang Wei-Zhong has practiced Buddhist Qi Gong and Martial Arts for over 40 years. He is a former member of the World Qi Gong Healing Association and he is a former Qi Gong Tui Na healer at the Shanghai Qi Gong Rehabilitation Center in Shanghai, China.

Grand Master Tang first came to America in 1997 for a short round of competition and demonstrations. In 1988, he was invited to Japan to teach Buddhist Qi Gong and Martial Arts to several Qi Gong Associations and hospital staff. He was asked to stay for several years.

Grand Master Tang has authored and appeared in many magazine articles in the USA, Germany and Japan. His articles have helped introduce foreign audiences to the unique health benefits of Buddhist Qi Gong and martial arts.

For many years, Mr. Tang has been competing and winning in international and domestic martial arts competitions in both the internal and external arts. He has more than 20 first place awards to his credit. After placing first in the US Internal Martial Arts Championships, the INS approved Mr. Tang for immigration based on his outstanding skills in the area of Martial Arts and Qi Gong.

The International Martial Arts Federation has named Grand Master Tang a chief instructor under their federation.